One Happy Moment by Louise Riley 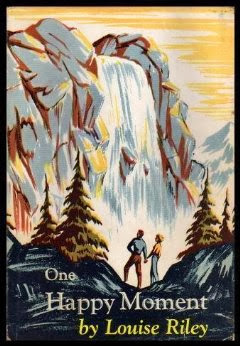 [These primeval solitudes] suspend your forced sense of your own importance not merely as individuals, but even as men.  They allow you, in one happy moment, at once to play and to worship, to take yourselves simply, humbly, for what you are, and to salute the wild, indifferent, non-censorious infinity of nature.

Published in 1951, One Happy Moment by Louise Riley has a surprisingly modern feel with its exploration of a woman's right to be her own person.  The novel begins as Deborah, the protagonist, arrives by train at a quiet mountain station, changes out of her skirt and blouse, pulls on a sweater, slacks and heavy shoes, shakes her hair free and tosses her suitcase into the lake.  Clearly, this is a woman shedding her past.  She is on her way to September Lake (set in the mountains between Lake Louise and Lake O'Hara) when she meets a wise old man of the bush who tells her:

These mountains have been here for a long time.  They will be here, real and powerful and eternal, when we are all forgotten.  They put us in our place.  But sometimes they give us something, too; strength, I guess you would call it.  Other people, like you, will come here for sanctuary.  Other people who are running away from something.


Of course, Deborah is running away from something; she is taking control of her life into her own hands, and escaping from under the thumb of a domineering mother and a manipulative lover.  Before she can begin a new life she must find solitude and peace in which to be able to come to terms with her past, to find the strength to forge her own identity, and to break free from these negative forces in her life.

This is a coming-of-age story without any startling departures from the expected.  The really fun part of One Happy Moment for me is in the setting. There are beautiful descriptions of a landscape Louise Riley knew intimately, and clearly loved.  She uses this mountain landscape to explore the theme of nature as a source of healing.  Deborah, surrounded by the grandeur of the Rockies, is cradled and rejuvenated, gaining perspective on her own troubles, and tentatively re-envisioning her life with only her own happiness in mind.

Just ahead, with the sun shining on it, stood the green shoulder of a mountain.  To her surprise it looked friendly and protective.  Deborah gazed at it for a long time before she turned to look acros the valley at a towering peak, dazzling in its snowy majesty.  Suddenly she was conscious of a feeling of safety.

Deborah slipped away from the Lodge and found a sunny spot on the lakeshore.  She sat, with an open book on her knees, gazing toward the glacier at the head of the lake.  she was not consciously thinking of anything.  The warmth of the sunshine, the serenity of the lake, and the strength of the mountains combined to soothe her mind, and, for the first time in weeks, her body felt relaxed.


After the thrill of her escape has died down, Deborah comes to the realisation that she is still anxious about the past.  Although she has physically removed herself from her past life, she still has emotional ties - she is afraid of the power it still holds over her.  A fatherly character reads to Deborah from the poet/philospher George Santayana:

To be happy you must be reasonable, or you must be tamed.  You must have taken the measure of your powers, tasted the fruits of your passion, and learned your place in the world and what things in it can really serve you.  To be happy you must be wise.  This happiness is sometimes found instinctively, and then the rudest fanatic can hardly fail to see how lovely it is; but sometimes it comes of having learned by experience, and involves some chastening and some renunciation; but it is not less sweet for having this touch of holiness about it, and the spirit of it is healthy and beneficent.


Soon after this quote, Deborah "felt that here was a moment, isolated and complete, when she wanted to look neither forward nor back."  From this moment, Deborah feels the comfort of friendship, of confidence in herself, and happiness in the present moment.

I especially enjoyed this passage - it felt a bit like an inside joke:

Deborah looked.  "Lake Louise," she whispered.  There it was, the shining blue lake, reflecting trees and mountains and the glacier at its head, its beauty waiting to bring infinite solace to the minds of men.

"It is even better than the picture post cards, isn't it?" asked Andrew.  "It lifts my heart up every time I see it.  But it will look better still after a beer and some lunch.  Come on."

They ate their lunch in front of a huge window overlooking the Lake.  "The C.P.R. should photograph you looking out with that rapt expression on your face, my dear.  They could make it into a poster and call it, 'Lucky Lady looks at Lovely Lake Louise'. 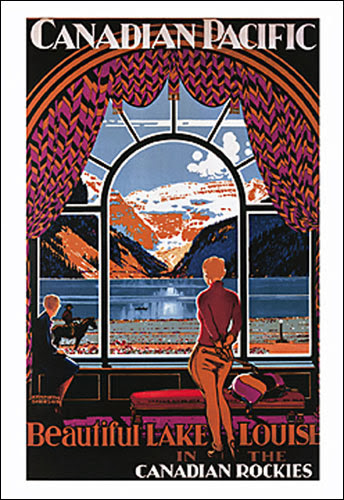 This novel has some interesting things to say about women finding their own way in the world and having the strength to determine their own destiny.  Each of the female characters reflects a different choice available to women: there is the feisty sexually liberated lodge owner who is unconcerned about social mores and always has the upper hand because of her confidence and beauty, there is the innocent young girl who shamelessly throws herself at the man she loves, there is the elitist snob who is so concerned with superficial that she never sees what is below the surface, and there is the busy-body who maintains power over her husband by brow-beating him.  Deborah finds not only a path for herself to travel, but influences the women around her through her graceful insistence on seeking her own way.  She is a strong women insistent on charting her own path, but feminine and respectable enough to do it without making anyone else feel threatened.

I enjoyed this novel.  It was delightfully escapist, but also contained some real wisdom about life and happiness.  It was fun to scamper through the same places I know so well. As the Wise Man of the Bush said, "These mountains have been here for a long time.  They will be here, real and powerful and eternal, when we are all forgotten.  They put us in our place."  It's funny to think how little has changed in those mountains since 1951! 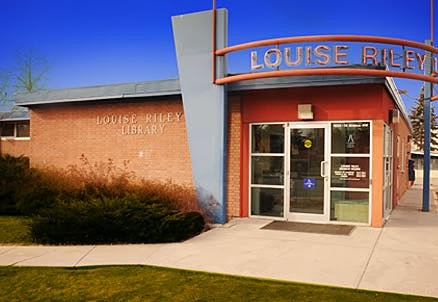 Who was Louise Riley?

Louise Riley was the granddaughter of Thomas E. Riley, an early Alberta pioneer rancher who worked the land along the Bow River.  The Riley family prospered as a result of the development of their ranch into the Calgary communities of Hillhurst, West Hillhurst, and Hounsfield Heights.  Her father, Ezra Hounsfield Riley donated Riley Park to the city in 1910.  Louise Riley became a children's librarian, storyteller and author.  She worked for the Calgary Public Library from 1930 until the time of her death in 1957.  A branch of the Calgary Public Library was named after Louise Riley.