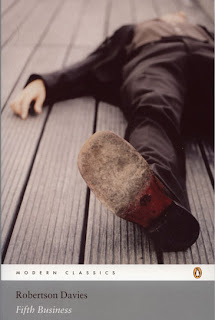 These roles which, being neither those of Hero nor Heroine, Confidante nor Villan, but which were none the less essential to bring about the Recognition or the denouement were called the Fifth Business in drama and opera compaies orgnized according to the old style; the player who acted these parts was often referred to as Fifth Business.

Written as a response to a flippant and factually incorrect biographical summary on the event of his retirement from teaching, Dunstable Ramsay writes his own version of his life to give to his Headmaster.  He needs to know that at least one person will know the truth of his life after he is gone.  Dunstable vows to write as honest a version of his life as he is able, but in his biased first person account we are definitely seeing life through his eyes.

Dunstable Ramsay, the son of stern Scottish Presbyterians lived in the small town of Deptford, in southern Ontario.  On his way home from sledding with his "frenemy" Percy Boyd Staunton a snowball (with a rock inside it) that Percy aims at Dunstable hits the pregnant wife of the Baptist minister and she delivered her baby, Paul Dempster, 80 days prematurely.  This one single act entwine him with Percy Boyd Staunton, Mrs. Dempster and her baby for the rest of their lives.

As a result of his feelings of intense responsibility for his involvement in Paul’s birth, and the revelation that Mrs. Dempster had suffered some type of brain injury from the impact, Dunstable devoted time and energy helping the Dempster to appease his own guilt.  He chopped wood, weeded the garden and babysat Paul, introducing him to the art of conjuring.  Even after the home life of the Dempsters collapses and they become ostracized from the community, Dunstable remained devoted.  In fact, he reveres Mrs. Dempster.

Joining the Army at the beginning of the Great War, Dunstable went to the frontlines as an infantry soldier.  His descriptions of the desperate agony of war, the loss of all individuality, of the unrelenting fear that soldiers must keep hidden, and the indignity of this “dung-coloured” world of the infantryman is powerfully evocative.  During the Third Battle of Ypres, at Passchendaele, he recounts his experiences when lost, disoriented and wounded in enemy territory he saw the face of Mrs. Dempster in the face of a Madonna in a bombed out church and interpreted it as a miraculous visitation.

Dunstable, who is "reborn" as Dunstan after the war, and after earning both a B.A. and an M.A. in History from the University of Toronto he began his career as a teacher at a boys’ boarding school.  Dunstan formalized his interest in the study of saints which took him on travels to Europe and leads to the publication of several books on the subject.  While he was in Europe he encountered Paul Dempster, reborn as a circus conjuror named Faustus Legrand and later as Magnus Eisengrim. Dunstan maintained his relationship with both Percy Boyd Staunton, who had also gone through a transformation and called himself “Boy” Staunton, and Mrs. Dempster for whom he became legally responsible.

This novel is a fascinating exploration of truth, myth, faith, the material and the spiritual, interior and exterior reality, and of the question of whom we can trust.  Dunstan could trust no one:

But what I knew then was that nobody – not even my mother – was to be trusted in a strange world that showed very little itself on the surface. (30)

And although he tries to tell the whole truth about his life, he too keeps his secrets, and hides his true thoughts and feelings within. 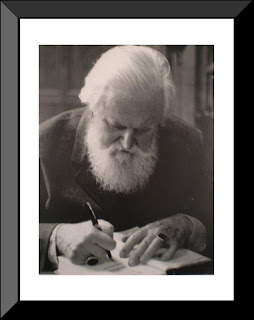 There is something in the writing style that put me in mind of Charles Dickens, especially at the beginning of the novel, with it’s jocular, ironic undertones, and the sarcastic wittiness.

Fifth Business is the first book in the Deptford trilogy which also includes The Manticore and World of Wonders.