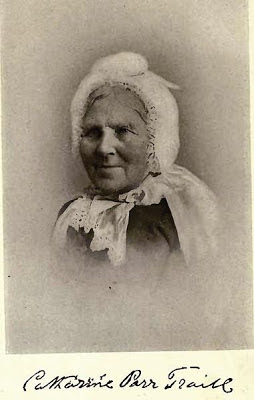 An immigrant to Canada, Catharine Parr Traill and her husband settled near what is now Lakefield, Ontario in 1832.  She wrote many stories and sketches of life in the bush for both British and Canadian publications and is most weel known for her book The Backwoods of Canada.

This sketch begins on a beautiful day of spring melt - a new beginning as old winter is casting off his coat of snow.  This is a transitory period of waiting for the ground is too soggy to make venturing out an easy venture, and the author is still recovering her health from a winter cold.  We are on the cusp of a new life, and the re-awakening of the sleeping world when into this hopeful picture comes news of the seriously ill neighbouring baby.

The harsh realities of life for the early settlers of Upper Canada is captured in this documentary narrative style vignette by Catherine Parr Traill of the death of an infant.  Far from medical help, a young mother, the wife of the manager of the nearby sawmill, sends for her neighbour to help her with her ill baby who is just 8 weeks old.  By the time she arrives the author sees that there is little hope for survival and remains so the mother can have some much-needed rest from her vigil.  But, as was so common in that age and place, the baby dies the following day.

Catharine Parr Traill's writing reveals a Christianity with a stark division between man and nature. As she stands in the doorway (which she does twice in this short narrative), she looks out on the "beauty and magnificence" of a Garden of Eden, whilst behind her in the house lay the effects of original sin - "human suffering and human woe."  She (and all humans) are trapped, like prisoners, in the human condition.  It is the lessons from nature, she instructs us, that show us how to be filled with gratitude, even at such a time.  Learning to read God's bounty in nature is an extension for Catharine Parr Traill of the lessons learned by reading the Bible.  It is not surprising that she is almost as well know for her botanical studies of Canadian flora as for her sketches of life in the bush.


'Tis a sweet quiet spot, that burial ground in the woods.  A few rudely sculptured stones - a heap piled here and there - a simple cross of wood, or a sapling tree planted by some pious hand, are the only memorials, to point out where rest the poor emigrant or his children.  But the pines sigh above them a solemn requiem, the wild birds of the forest sing their lullaby, and the pure white lily of the woods and the blue violet, grow as freely on their green mossy graves, as though they slept within the holy shadow of the sanctuary.  Their resting place is indeed hallowed, by the tears and humble prayers of their mournful relations.

Backwoods of Canada: Being Letters From the Wife of an Emigrant Officer, Illustrative of the Domestic Economy of British America (1836)
Canadian Wild Flowers (1868)
Studies of Plant Life in Canada; or, Gleanings from Forest, Lake and Plain (1885)
Forest and Other Gleanings: The Fugitive Writings of Catharine Parr Traill (1994)