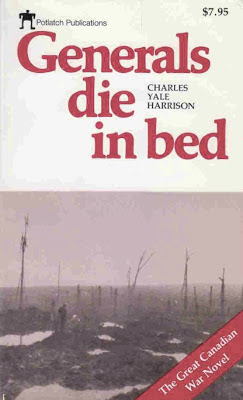 First published in 1930, Generals Die in Bed by Charles Yale Harrison is a powerful and harrowing anti-war novel based on Harrison's own experiences serving as a machine gunner in France and Belgium with the Royal Montreal Regiment in the First World War.  Narrated in the first person, present tense (a tricky one to get right!) by an unnamed young Canadian soldier who, by the time he is wounded at Amiens, is the sole surviving member of his section, General Die in Bed is a story that will stick with you long after you put the book down.

In the introduction of my edition (the one pictured above), Robert F. Nielson quotes the English novelist Ford Madox Ford:


I think this is a hell of a good book.  It is a plain unvarnished account of things without any literary frills - it ought to be a good antidote for all the gush of ain't-it-awful literature which romanticizes war in a subtle sort of way.  Generals Die in Bed has a sort of flat-footed straightness about it that gets down the torture of the front line about as accurately as one can ever get it, I think.

That "flat-footed straightness" is reminiscent of Ernest Hemingway's writing style with it's short sentences and lack of emotion.  For example:


We are filthy, our bodies are the colour of the earth we have been living in these past months.  We are alive with vermin and sit picking at ourselves like baboons.  It is months since we have been out of our clothes.  We begin to talk of the last time we slept between sheets.  A flood of reminiscences begins. (39)


I stumble along the trench looking for my section.  It is quite dark, there are no lights in the sky.  No moon, no stars.

I reach the front line.  I recognize faces.  My name is called.  It is Fry.  He grasps my hand and shakes it heartily.  His face is serious.

Events that are too horrifying to contemplate are related in this factual manner, which offers the appearance of them being less horrifying than they really are, and replicates the coping mechanisms used by the soldier.  Yet, at the same time, this emotional detachment increases the horror we, the readers, feel at the brutalizing effects of the trench conditions, and the effects of warfare on the soldiers.  Harrison repeatedly uses imagery to reveal through contrast or irony such as the rain concealing his tears, and gently pinging his helmet in contrast to what has just happened to Cleary's helmet. 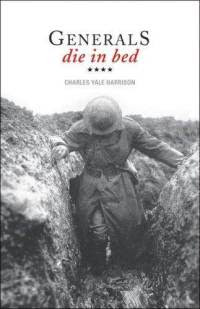 Harrison explores many themes in his short novel.  The soldiers experience animorphism as they burrow into the sides of trenches for protection from the rain of shrapnel, and as they wolf their rations and scramble for the food of the recently deceased.  The demeaning effects of living with the dirt and vermin is detailed in this factual manner.  The most anti-war aspect of the novel is the repudiation of the propaganda that this was a "gentleman's war."  The uninformed and brutalized foot soldiers were not fighting the same enemy as the public at home.  At home, the newspapers were casting the Germans in the roll of the enemy, but for the soldiers in the trenches it was a different focus altogether:


We have learned who our enemies are - the lice, some of our officers and Death.  Of the first two we speak continually, the last we rarely refer to.
Strangely, we never refer to the Germans as our enemy.  In the week-old newspaper which comes up from the base we read of the enemy and the Hun, but this is newspaper talk and we place no stock in it.  Instead we call him Heinie and Fritz.  The nearest we get to unfriendliness is when we call him "square-head."  But our persistent and ever-present foe is the louse.

But this blase attitude toward the enemy does not stop them from the terrible acts they were forced to commit against the boys in the other trench just as innocent and pathetic as themselves.  The real enemy are the voices that propagate the need for war, such as businessmen who are getting rich from the manufacture of wartime necessities.

When the narrator is granted a ten-day leave in London he indulges in all the commonplace activities about which he has fantasized whilst in the trenches.  He sleeps between clean sheets, fills his belly with food and drink, and visits the entertainment halls with a girl named Gladys.  He is appalled by the comedy routines in the music halls:


I buy the tickets for the theatre.  Inside the performance has started.
On the stage a vulgar-faced comic is prancing up and down the apron of the stage singing.  Behind him about fifty girls dressed in gauzy khaki stage uniforms, who look like lewd female Tommies, dance to the tune of the music.  Their breasts bob up and down as they dance and sing:

The tempo is quick, the orchestra crashes, the trombones slide, the comic pulls impossible faces.
The audience shrieks with laughter.  Gladys laughs until tears roll down her face.
The chorus marches into the wings.  A Union Jack comes down at the back of the stage.  The audience applauds and cheers.
I feel miserable.
The fat comic - the half undressed actresses - somehow make me think of the line.  I look about me.  There are very few men on leave in the theater.  The place is full of smooth-faced civilians.  I feel they have no right to laugh at jokes about the war.
I hear Gladys' voice.
"Don't you like it, boy?"
"No, these people have no right to laugh."
"But, silly, they are trying to forget."
"They have no business to forget.  They should be made to remember."
[...] I cannot formulate my hatred of these people.  My head is fuzzy but I feel that people should not be sitting laughing at jokes about plum and apple jam when boys are dying out in France.  They sit here in stiff shirts, their faces and jowls are smooth with daily shaving and dainty cosmetics, their bellies are full, and out there were are being eaten by lice, we are sitting trembling in shivering dugouts...

The narrator expresses more outrage at the behaviour of the Londoner's in the music hall than he ever does at the Germans he is fighting.

I highly recommend this novel!  Anyone who enjoys novels about the First World War, or books written with a sparse, reportorial style similar to Ernest Hemingway's will find Generals Die in Bed a stunning achievement.  The imagery will stay with you long after you put the book down.  This moving anti-war novel is most impressive when he allows us to experience the real trauma and sacrifice as well as sharing the narrator's realization of the futility to all the suffering.  The truth of his perspective lies in the authenticity of his words.  He is not there to prove or disprove any philosophical arguments about war - he records his experiences and allows the reader to draw his/her own conclusions.

All Our Yesterdays by H. M. Tomlinson
God's Sparrows by Philip Child
Her Privates We by Frederick Manning
A Farewell to Arms by Ernest Hemingway
All Quiet on the Western Front by Erich Maria Remarque
Goodbye to All That by Robert Graves
Memoirs of an Infantry Officer by Siegfried Sassoon