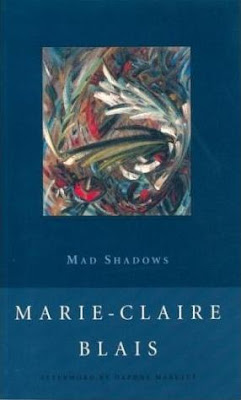 The
train
was
leaving
town.
Lying back with his head against his mother's shoulder, Patrice followed the dappled countryside with a melancholy expression.  Behind his forehead everything grew confused, like a billowing stormcloud on a screen.  He watched in silence and did not understand, but his idiot face was so dazzling that it made one think of genius.  His mother caressed the nape of his neck with the palm of her hand.  With a gentle slip of her all-too-supple wrist she could lower Patrice's head to her bosom and hear his breathing more easily.
On the other side, aloof and motionless, her daughter Isabelle-Marie sat pressing her sharp features against the window.  Louise often said to herself, "Isabelle-Marie never really had the face of a child... But Patrice... Oh, Patrice!"
Isabelle-Marie was thirteen.  She was tall and emaciated; her alarming eyes, so often full of anger, seemed glued to black bone.  When she scowled, the lower part of her face twisted into a look of fierce contempt.  It was almost frightening.

So begins the first novel of Marie-Claire Blais (translated from the French by Merloyd Lawrence), written when she was just twenty years old and entitled, in the original French, La Belle Bête.  Isabelle-Marie, the neglected, unattractive daughter represses a ferocious and anguished desire to repay her mother for emotionally abandonning her.  Patrice is her ten-year old brother, the "beautiful beast" to whom their mother Louise is devoted.  He is is so beautiful that strangers cannot help but stare, but he is intellectually vois with "large green eyes as empty as the night."  Marie-Claire Blais creates this family full of real psychological pathology but sets it in a fairy tale-like setting full of symbolic meaning.

While evidently a social commentary on parochial Quebec society, an important theme in Mad Shadows for me is the soul-destroying indulgence in superficial attributes such as beauty and riches.  This is a cautionary tale of what happens when the dark side takes over and revenge overshadows forgiveness, kindness to others is overwhelmed by self-interest, and the pursuit and adoration of beauty and money come before the nurturing and loving of children.  Each character is lacking a crucial element to their personality; Patrice has no conscience, no intelligence, no memory; Louise has no compassion and no feelings for others beyond their use in fulfilling her own desires; Isabelle-Marie lacks the ability to control her rage.  Rather than acknowledging their failings and reaching out to one another for support, each character is ruled by them and remains isolated and ultimately destructive to themselves and everyone else.

This is a dark and at times disturbing story, a gothic tale of festering, diseased souls eating away from within and, finally, bursting forth in all-encompassing destruction.  I enjoyed the skill of the writer and the depth of her character-building.  This is an astounding first novel, and I am looking forward to reading Tête Blanche which was her second novel, published in 1960 which is sitting on my shelf.


Marie-Claire Blais in the Canadian Encyclopedia