The Jade Peony by Wayson Choy 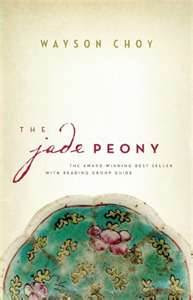 Set in the 1930s and 1940s, The Jade Peony is the story of an immigrant Chinese family living in Vancouver, British Columbia and told in three separate first person accounts.  First, we hear the story of Jook-Liang, the only daughter in the Chen family.  A young girl fascinated by Shirley Temple, tap dance and Chinese fables, Liang is comfortable in her position in the middle ground between Chinese and Canadian cultures.  She befriends, and is befriended by an old Chinese man with a kind heart and a deformed body whom she first thinks is the Monkey King, a figure in Chinese folklore. We then learn about the life of the second brother, Jung-Sum, who finds his place in the boxing gym but is confused about his personal identity and how he fits into his society.  Third brother, Sek-Lung tells a poignant story of overcoming childhood illness, attending school, and of befriending his babysitter and her forbidden boyfriend.  Each of the children has to forge his or her own identity from the Chinese and Canadian cultures that surround the family as well as from their own personalities.  In the background of the story is the omnipresence of the war between Japan and China.

Wayson Choy does a wonderful job evoking the difficulty with communication between China and Canada for the immigrants who left their families and friends behind, and the anxieties in the adult world about the family they have left behind.  Although the children are aware that the adults around them are anxious, the war to them is a distant and abstract notion.  The children in the novel search to find what the distant war means to each of them.  The events in China have direct and person affects on the adults but these ties are removed from the children emotionally, having no first hand knowledge of the country or the people.  His ability to speak with such realism in the voice of a child left me marvelling!

The construction of this novel reminded me of three separate but related novellas or short fiction.  Each story had a distinct voice and time period in the history of the family.  It was like reading a 3D  portrait of the changing landscape in family life.  As a child from a large family, I enjoyed this aspect of the novel's construction.  My siblings' childhoods were as different as the three children in this family although we all shared the same parents and home.  Each child lives in a different time and space by the very nature of being born in different years. I was more interested in the first and last sections and found the middle part of the book to drag a little.   The winner of the 1995 Trillium Book Award, (also awarded to its sequel All That Matters), and of the 1995 City of Vancouver Book Award and chosen as one of the five books in the 2010 CBC Canada Reads.  The Jade Peony deserves these accolades and more!