The Mistress of Nothing by Kate Pullinger 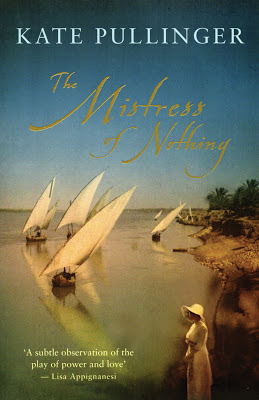 Winner of the 2009 Governor General's Literary Award for Fiction, The Mistress of Nothing is a fictionalized first person account of the real-life Miss Sally Naldrett, lady's maid to the actual Lady Lucie Duff Gordon.  It is 1862, and Sally is in England, and preparing to travel to Egypt in search of relief or cure for her ladyship's lung disease:


I work hard but my Lady is a most rewarding employer; everything I do for her is exactly right, or so she would have me believe.  On my day off - one per month, when we're at home, unless my Lady is too unwell for me to leave her - I put on my bonnet and take the train up to London: my Lady always says that a woman my age has a right to travel up to London by herself and I couldn't agree more.  The train up to London, a walk through the city - just saying those words makes me smile with pleasure - the noise, the smells, the people.  Up the steps of the Museum in Bloomsbury, through the exhibition rooms, the corridors lined with glass cases, past the giraffe whose neck is so long you injure your own neck looking up at it, past the knives and coins and cups and urns in their crowded display cases, until I reach the room that is my destination: the Egyptian Sculpture Gallery.  I take a seat and close my eyes before I've seen too much - I don't want to spoil my anticipation by seeing it all too quickly.  I've come all this way to look and yet, once I'm there, I can hardly bear to see.  I open my eyes and there they are: the Pharaohs, their gods, and the hieroglyphs - the secrets of that ancient land encrypted in stone.

I have my favourite.  The first time I saw his shapely long face I thought he was a woman.  But no, he's a man, a colossal Pharaoh.  Almond eyes, kohl-rimmed like a cat's; I would run my hand along his cheek if I could reach that high, over his lips, down to his great chin, feeling the stone bones beneath the smooth cool stone skin.  I stare at him, and he stares back at me.  I laugh at myself: he's the man of my dreams.

Lady Duffy Gordon and Sally arrive at the Alexandrian home of Mrs. Ross, the grown daughter of her ladyship.  The extroverted lady becomes subdued and melancholic with lack of society.  The women have trouble adapting to life in a foreign city.


There was no real sightseeing to be done, as Alexandria's historical monuments consist of mere rumour and conjecture - phantom monuments, as my Lady said, no more, no less - this might have been where Alexander the Great's tomb lay; Pharos lighthouse, one of the Wonders of the Ancient World, probably stood here; but there was nothing to see.  Instead there was the wildest mix of cultures imaginable, all attempting to see something - a slick Italian barber next door to a Syrian baker with a mud oven, a gorgeous French patisserie with a gaggle of peasant women buying and selling oranges right outside its polished glass doors.

Their transition is eased with the help of two gentlemen who suggest to them a dragoman, or guide, who reminds Sally of the sculpture in the Egyptian gallery in London.  Mr. Omar Abu Halaweh, the Father of the Sweets teaches Sally to speak Egyptian, makes their food purchases and takes care of both of the women.  Sally, Omar and her ladyship form a trio - a pyramid of sorts with the Lady Duff Gordon at the peak.

Initially I saw a great number of similarities to E. M. Forster's A Passage to India, and even A Room with a View, but this is in no way derivative.  A period novel about two women, of different age and wealth, travelling in a foreign land, and an ensuing entanglement is bound to provoke this literary connection.  The theme of travel as self-revelation is explored in each of these novels as well:


What happens when you leave everything behind?  When you leave everything familiar, not just houses and streets and wet windy winter-time, but husbands, children, friends?  For me: the train into London on my day off; the arriving back home again.  The branch of the oak tree that knocks against the roof of the stable.  The postman who comes down the lane.  None of these things have followed me to Egypt.  Does this mean I am no longer the same person?  Does this mean that I too have changed?

Lady Duff Gordon is also transformed by her life in Egypt; her acceptance and rejection of the European mores and conventions set the tone for what is acceptable in her household.  She discards the outerwear of the European lady of status and adopts the more practical and comfortable attire of the Egyptian man, yet she rigidly holds firm to the code of conduct she uses to define an acceptable woman.  Omar becomes a study in contrasts: a virile, yet emasculated man, and a further exploration of gender, status and ambition. And watching Sally transform through the novel is exciting.  She develops from a model of servitude to a fully-realized woman.

Although the book retained my attention right to the end, I did have some issues with the author being too oblique with some of the actions and motivations of the characters.  There were many elements that felt unresolved and missed opportunities for more cohesion.  I am somewhat surprised that it won the GG, but it was still a very enjoyable read.

Here is a link to an excerpt from Kate Pullinger's website.