A little update on this week's reading.

I know I said that I was going to try to write more this month, but I'm just not really feeling in the writing mood, you know?  So, rather than let another week go by without writing anything, here are some very quick thoughts on the four novels I finished this week:

Trying to work on my long-neglected French reading skills.  I was half way through this one before I realised that the peripheral character named Barbie was that Barbie (it was her home town of Malibu that tipped me off, and the little pink B on the cover suddenly made sense).  I was pleased to make it through the whole book quite quickly since it's been a very long time since I've read anything in French.  While I certainly wouldn't highlight this as a great piece of writing, it gave me an appreciation for beginner chapter books.  This one perfectly suited my abilities at the moment in terms of vocabulary and grammar. The premise of the book is far-fetched; a nasty food critic with 48 hours to live searches for a taste that has eluded him.  The descriptions of food preparation and consumption are guaranteed to elicit activation of the salivary glands. I found the succession of short, first-person narrations disorienting, and none of the voices interesting enough to really hold my attention.  I am unsure about whether this is a result of something crucial being lost in translation.  Perhaps if I continue to read more Barbie novels I will soon be able to tackle this in the original French. 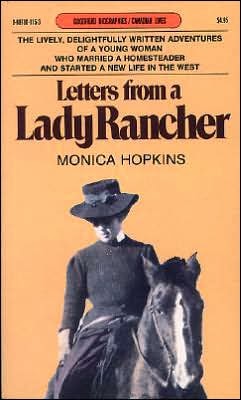 Letters from a Lady Rancher by Monica Hopkins (1982)

This book is an absolute joy which should be celebrated along with all the classics of the pioneer experience.  Monica Hopkins was a young English woman who moved to a ranch near Priddis, Alberta after her marriage in 1909, and in letters to an Australian friend recorded the first 26 months of her experience.  Her attitude shines from the pages; she tackles the hardships and isolation and discomfort of life as a lady rancher with an enthusiastic sense of adventure, good humour and without any hint of complaint or self-pity.  She records the details of her daily life in the house and on the range, interactions with neighbours and trips to nearby towns (Calgary, Banff) with careful observation and a compelling writing style.  I highly recommend this book, originally published by the Glenbow Museum in Calgary in 1982. 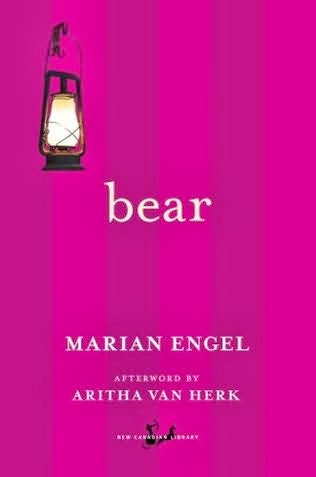 Winner of the 1976 Governor General's Literary Award, Bear is the story of an archivist, Lou, who spends a transformational summer on an island in northern Ontario cataloguing the estate and library of Colonel John William Cary.* There she discovers that she is also responsible for an aged bear that has been held captive on the property.  I was apprehensive to read this classic of Canlit because it has had more than it's fair share of controversy, but I really enjoyed it!  Bear reminds me a great deal of Margaret Atwood's Surfacing as the protagonist enters a fantasy world (sort of) where she struggles through a personal identity crisis that very much reflects the gender inequities of the time.

*Interestingly, my three brothers are named John, William, and Cary :)