Earth and Ashes by Atiq Rahimi 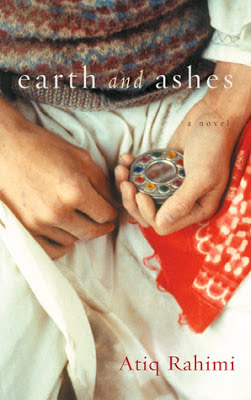 The first thing you notice about Earth and Ashes is that it is written in the second person present and you say to yourself, "It is a clever writer who can make this point of view work well!"  You see that the book is only eighty-one pages so you tell yourself that even if it fails it's a short book.

But you are very quickly drawn into the story: you become an old man sitting by a bridge in Afganistan with your deaf grandson trying to keep the dust from the apple he eats.  You wait for a car to take you and your grandson to the Karkar coal mine where your son Murad works.  You confirm with the guard in the hut that there have been no cars past but he is iritable and does not ease your loneliness.

So far, you think, this book is promising.  It has a clearly imagined setting.  You can see the dust on that apple, feel the heat from the sun, and see the greyness of the dry landscape.  You are curious to learn more about the old man and the boy.

Then you begin to wonder, "Where is this going?"  Oh, no!  The book has suddenly gone all surreal with erupting mountains and rivers of flowing fire.  And then with a sigh of relief you see that the old man has just dozed off from exhaustion and had a nightmare.  You can see that he has a challenging life, that he struggles with loneliness, but is reluctant to discuss his experiences, and the destruction he has seen as a result of the war with the Russians.

You notice there are no women in this story.

You read this sentence:


You know, father, sorrow can turn to water and spill from your eyes, or it can sharpen your tongue into a sword, or it can become a time bomb that, one day, will explode and destroy you,

You wonder what a jujube is, and you google it.  (Turns out it's not just a candy, but an apple-like fruit that when mature resembles a date, and has a stone like an olive, and the wonderful botanical name of Ziziphus zizyphus).  You marvel at the ability of children to make toys out of what surrounds them, even jujube fruit stones.

You wonder if Atiq Rahimi has ever read Waiting for Godot because the old man and his grandson sure are having to wait a long time at the side of that road.

But you learn more about the old man (including hat his name is Dastaguir) and you feel that he has indeed suffered great loss in this war.  You see that he is on a quest to find his son, and you worry about what he will find when he arrives at the mine.

You have to come care for this dusty old man from Afganistan and you can hardly believe the sorrow that he has had to bear.  But you wonder, "Will this sorrow turn to tears, a sword, or a bomb?"  You come to the end of the book and you breath out.  So much heart-break so skilfully rendered.  You think, "Atiq Rahimi, you rock the second person present."


Author image from here (along with an interview with Atiqu Rahimi)

From the book jacket:

[Born in Kabul in 1962 Atiq Rahimi was 17 years old when the Soviet Union invaded Afganistan.  He left the country during the war, eventually obtaining political asylum in France.  Rahimi now lives in Paris where he makes documentary films.]