The Unknown Thrillers of Louisa May Alcott 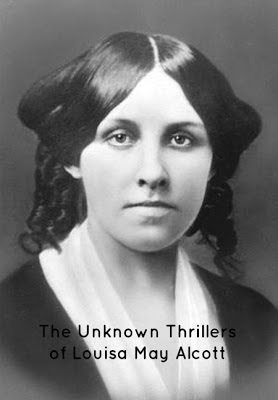 I was introduced to the "unknown thrillers" of Louisa May Alcott during a women writers course in university, and was captivated by the "blood and thunder tales" written by this author who was revered for her gentle, moral tales such as Little Women and Eight Cousins, and was known as "The Children's Friend."  She produced these "potboilers" anonymously, and pseudonymously as A. M. Barnard, out of economic necessity: at times her family struggled with poverty, and like Jo Marsh wrote to sustain her family. She wrote these dark, lurid Gothic tales of deceit, violence and revenge with a subtle feminist twist, and although less likely than her sweet tales to engender devoted fans, these thrillers have shed light on the complex life of the writer.

I found this quote from the Introduction of Behind a Mask: The Unknown Thrillers of Louisa May Alcott (Madeleine Stern, editor) fascinating:


I think my natural ambition is for the lurid style.  I indulge in gorgeous fancies and wish that I dared inscribe them upon my pages and set them before the public... How should I dare to interfere with the proper grayness of old Concord?  The dear old town has never known a startling hue since the redcoats were there.  Far be it from me to inject an inharmonious color into the neutral tint.  And my favourite characters!  Suppose they went to cavorting at their own sweet will, to the infinite horror of dear Mr. Emerson, who never imagined a Concord person as walking off a plumb line stretched between two pearly clouds in the empyrean.  To have had Mr. Emerson for an intellectual god all one's life is to be invested with a chain armour of propriety...  And what would my own good father think of me...  if I set folks to doing the things that I have a longing to see my people do?  No, my dear, I shall always be a wretched victim to the respectable traditions of Concord.

The introductory segment of the documentary "Louisa May Alcott: the Woman Behind Little Women" can be found here.  (Did you know that Louisa May Alcott was a runner?  She ran up to 20 miles at a time!  Without wicking fibres and seamless socks).

I have decided to work my way through the three volumes of stories I have on my shelf; I plan to read a new story every couple of weeks.  I believe there have been at least thirty stories now discovered to have been anonymously or pseudonymously published.  I have access to twelve of these, some more aptly described as novellas.  I would love to have some company reading these if you are interested to see this darker side of Louisa May Alcott's writing.

The collections I have are:

Behind a Mask: The Unknown Thrillers of Louisa May Alcott, edited by Madeleine Stern, Morrow, 1975.