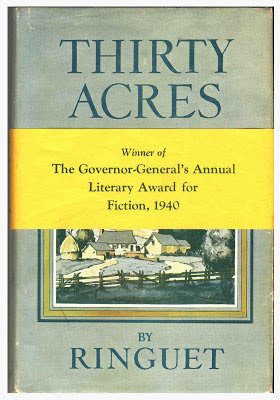 Published in 1940, and translated from the French by Felix and Dorothea Walter, Thirty Acres by Ringuet is a classic of French-Canadian literature.

We are first introduced to the Laurentian farm setting through Mr. Branchaud and Euchariste Moisan as they sit smoking their pipes on the Branchaud's porch. These two French-Canadian farmers talk about ploughing and the weather and the challenges of farming stony soil ("the unfeeling and imperious land was the lordly suzerain* whose serfs they were..."), but there is an undercurrent of words left unspoken. The conversation circuitously makes its way to Alphonsine, the daughter of Mr. Branchaud whom Euchariste has been courting. Euchariste Moisan and Mr. Branchaud agree on an engagement with no more emotion than if a transaction over a piece of farm equipment, or livestock were changing hands... which, in a way it is.

Euchariste is a practical man out of necessity, and his choice of a wife is entirely pragmatic. The idea of love does not enter the picture when he acknowledges to himself that Alphonsine would make a suitable wife for him, as a farmer, and would "breed him healthy sons." He wants her more than he cares for her, and his description of her as "firm, full-breasted, with a rather heavy mouth, wide hips swaying with a motion like the rocking of a cradle..." tells us all we need to know about his values, his desires, and his vision for the future.  Alphonsine Branchaud is a commodity, an economic necessity, and her value is based on her production of both children and meals.  Every mention of Alphonsine links her to a monetary transaction.  Even her sexual purity is seen in these terms: "she was a farmer's daughter and knew that no one will buy something later on if they've had it for nothing the first time."

Euchariste's main interest in Alphonsine is as the means of producing sons who will work on the farm.  He imagines a brood of children; he will allow one to be trained for the priesthood, and he foresees this raising his status in the community, but his sons will work the land just as he works the land. The link between marriage and fertility is implicit, and strangely foreign in our culture in which marriage equates more directly with love.  But this marriage is not an emotional event; it is following the laws of nature.

Branchaud seemed to be gazing at the earth, all decked out in gold and purple for its own wedding in the spring, when the sun would fertilize it once again, after it had waited patiently all through the long winter under a white bridal veil of snow.

Neither is the fertility that follows the marriage a reason for emotion:

He accepted these births without enthusiasm, but also without regret.  The farm could support as many Moisans as were likely to arrive.  If there were to be ten of them, well, there'd be ten; if fifteen, then fifteen.  Just like everybody else.  What would be must be.  Alphonsine would have to bear her appointed number.

Marriage between people is seen as merely replicating what is happening in the natural world.  We see this comparison made often in the novel.  The French-Canadian farmers are living in harmony with their surroundings.  When Euchariste's Uncle Ephrem sways to and fro in his rocking chair he is keeping time with the clock which mechanically "cut up the hours into minutes" and the autumn rain which taps "undecipherable messages on the panes."  These are people who live to the beat of Nature and their environment.

When Uncle Ephrem hears Euchariste's plan to marry Alphonsine, he tells Euchariste that he will retire to the village, leaving his thirty-acre farm to his nephew as an early inheritance. But Uncle Ephrem is not one to retire from the farm - he "died pressed close to this farm of his that could not consent to a divorce." But his uncle is barely cold when Euchariste has emotionally moved on:

His thoughts turned back to living things and were borne down the wind towards the waiting animals and towards the patient earth, that was indifferent to the death of the man it nourished and who was now to unite with it.


We haven't gotten inside the head of the character yet, so who knows... is he just shy? or is he another Caleb Gare in the making?

I have a soft spot for the use of figurative language, and Ringuet delivers in spades!  Here is an example - a random paragraph from the end of the fourth chapter:

The sun sank low on the horizon, hesitated there for a few days, and then began to climb back towards the zenith.  February heaped the snow still higher on the roads.  The farm-buildings wrapped themselves in snow-flakes, like a sick man in a woollen blanket, while day and night the breath of the house issued white from the chimney.  Sometimes the whole country-side was seized in the grip of a snow-storm, driven by a fierce wind rushing down from the north; eddies of fine snow swirled about like smoke, sealing the doors and windows and shaking the black skeletons of the trees until they creaked.


Similes, metaphors, personification, prosopopeia... it's all there in one paragraph!

Thirty Acres offers a view into the life of Euchariste Moisan, a farmer in the Laurentian region of Quebec.  A simple man, bonded to the land, we follow him from young adulthood to old age, but we must infer his motivations and his personality from his behaviour.  Ringuet allows this reticent character slowly unfurl over the years as he builds his farm, and family, and interacts with his neighbours and family.  Ringuet does not tell us how to respond to Euchariste, but allows us to see the very human man with strengths and foibles who is at least in part a symbol of parochial rural Quebec society.  Euchariste is just one link in a long chain of generations who have worked the land, who, when young, push for progress and when old scorn the calls for progress from the youth.  This is a story of the cyclical nature of families, of the history of the province, of the place of Quebec in Canada and the world.  So many themes are explored.  This is an important book.

I enjoyed reading this Thirty Acres for its glimpse into a time and place not so far removed, yet a world away from my own life.  However, I was horrified by the reality of life for Alphonsine.  Not only is she treated like livestock, but, *she's treated like livestock.*  This book makes me even more thankful for the women's movement (and birth control).

I was often reminded whilst reading of my Great Uncle Jack, now 84, who, last summer took us to the old family homestead in the Ottawa Valley (not so far from Quebec) where he and my grandmother had lived when they were children.  He showed us a stand of trees and told us that he had ploughed that with a hand-plough when he was a lad; he showed us the plot of land where my grandmother had tended the potato plants, also now a small forest.  I returned to these thoughts about my Great Grandparents working their plot of land in the Ottawa Valley frequently when reading Thirty Acres, and perhaps it gave me a sympathy for the characters I would not otherwise have felt.

Ringuet’s distinguished career in medicine complemented his deep commitment to literature. His first book, Writing…in the Style of…, was a series of literary parodies of famous writers. His first novel, Thirty Acres, a panoramic portrait of Quebec’s traditional agrarian society in the process of change, won immediate critical acclaim and was translated into Dutch, English, German, and Spanish.

Ringuet’s later fiction often explores the discontent that confronts his character in their urban settings.

In 1944 Ringuet was a founding member of L’Académie canadienne-française and served as its president from 1947 until 1953. He was appointed Canadian ambassador to Portugal in 1956.

* I had to look up the word suzerain, a word used more than once in Thirty Acres, and in the process discovered that there is a board game of the same name!