The Greengage Summer by Rumer Godden 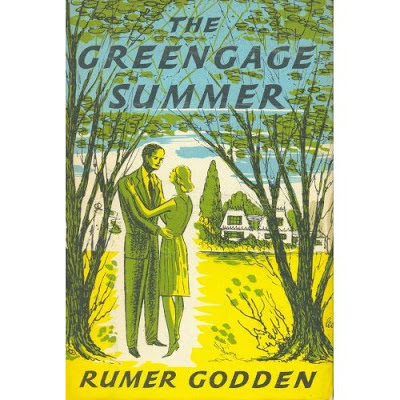 The first thing I had to do was to research exactly what a greengage is.  And when I found this recipe for greengage chutney and I wished very much they were something I could get my hands on!

The Greengage Summer by Rumer Godden is a gem of a book.  I only knew of her from reading her childrens' book The Story of Holly and Ivy to the girls when they were little, but was introduced to her many novels at Leaves and Pages where you will find numerous reviews of her books. (Thank you, Barb!)

Initially, I was reminded very much of Edith Nesbit's The Railway Children.  Perhaps it was the circumstances of the absent father (this one in Tibet on a botanical expedition) and the mother and her children walking from the train station in the dark with their baggage in a cart that did it, but that resemblance soon faded, and The Greengage Summer took me to a very different time and place altogether.

Fed up with their behaviour at home, the mother has decided to take her five children to France for an exploration of sites of wartime self-sacrifice, and the martyrdom of Joan of Arc.  They barely arrive in the country when Mother becomes very seriously ill and is taken to a nearby hospital.  The children are forced upon the begrudging matron of the pension who only allows them to stay without adult accompaniment at the insistence of an Englishman also at the pension who agrees to act as their guardian.

Narrated in the first person by the second eldest of the five children, Cecil (who must surely be a boy... but no!) records their adventures in this village in France. Written in a self-conscious storytelling manner, Cecil begins with a summary of the whole summer, written from a point in time in the future.  Conversations interject the text as the characters at the time of writing discuss the details, and Uncle William, who wasn't there at all, makes comments on the events, almost as though he is reading the book along with us.  To start, it is all a jumble of past, present, and future overlapping and doubling back on itself.  The familiar tone and use of nicknames and shorthand for events makes you feel that you've just walked into the middle of a family story... which we have.  Joss (the eldest, and surely a boy... but no!) decided that it must be Cecil who tells the story, but it is a shared story really, parallel coming-of-age narratives for both girls.  Even with all this layering of time and space, Rumer Godden so cleverly crafts the story that there is never any confusion about when and where everything occurs.  Soon the chronology smooths and we are given the whole story in the order in which it happened.

Favourite aspects of The Greengage Summer were in the cast of well-rounded characters, the vivid evocation of time and place, the slow and steady building of suspense. Rumer Godden's ability to combine Cecil's more mature perspective - the point in time when she records the story - with her innocent child-like awareness of the events as they occurred without sounding an artificial or false note is striking.

A working knowledge of French would be very helpful when reading this novel, as there is frequent untranslated dialogue by the French characters, and without an understanding of what they are saying I'm sure there would be a great possibility of confusion.  This is my one and only caveat.  Otherwise, I whole-heartedly recommend The Greengage Summer.