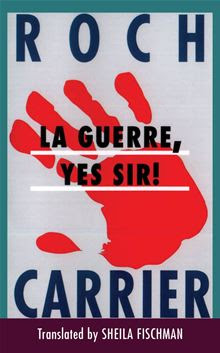 While reading Rumer Godden's The Greengage Summer earlier this month, I was regretting the lack of swear words in my French education.  I looked up some of the words uttered there and found them translated as "You are around the twist!" and "Loon!" which I would be tempted to classify as insults rather than curses.  Understandable, I suppose when considering the tender age of the narrator, the intended audience, and the year of publication.  What I found in La Guerre, Yes Sir!, on the other hand, fit every definition of swear words.

I thoroughly enjoyed Sheila Fischman's "Translator's Note" in which she explains some of the choices she made, especially regarding the words and phrases she left untranslated, including the title and the curse words, because of the cultural significance of the actual words.  The church (Roman Catholic, of course) plays a central role in the lives of the faithful and unquestioning characters, yet:


there is an underlying resentment of it, a desire to escape in some way from its strictures.  This rebellion is achieved in a figurative way by the use of a most amazing collection of oaths and curses, which call on virtually every object of religious significance to a Roman Catholic.

I will admit to feeling a bit uncomfortable about reading such frequent cursing to begin, but by the end of the novel had gotten over my squeamishness and saw the point the author was making, and appreciated the verisimilitude.

But the beginning... what an introduction!  I began reading La Guerre, Yes Sir! just before the time I usually fall asleep.  What a mistake that was!  The first half page had me sitting up in bed, rubbing my eyes and re-reading.

Joseph spread the five fingers of his left hand on the log.

He heard breathing behind him.  He turned around.  It was his own.

His other fingers, his other hand, seized the axe.  It crashed down between the wrist and the hand, which leapt into the snow and was slowly drowned in his blood.


That got my attention!  Hmmm... so, perhaps the title is ironic.  Joseph seems to be saying "La Guerre?...  No Sir!" with this shocking gesture. So, we start the novel with cursing and limb severing.  It can only go up from here!

The novel is an examination of life in a small village in Quebec during WWII, and the events surrounding the repatriation of the first villager to have been killed in the conflict.  The Conscription Crisis of 1944 divided the country, and was a political hot-potato in Quebec where the European conflict was not seen as being their concern.  The return of one of their sons in a coffin brings the conflict into their midst.

I find it fascinating to experience the conversation that happens between books with overlapping themes.  Having recently read Maria Chapdelaine by Louis Hemon and Thirty Acres by Ringuet, I think of these books and La Guerre, Yes Sir! by Roch Carrier as forming a trilogy of sorts for me, for all three are set in rural Quebec and touch on the themes of parochialism, Quebec nationalism, isolationism, the role of the Catholic Church in society, the impact of America and English-Canada on the insular nature of traditional life in Quebec.  Ringuet and Carrier both deal with the events of the second world war and its effect on parochial villages.  But whereas humour isn't the first thing that springs to mind when thinking about Maria Chapdelaine and Thirty Acres, La Guerre, Yes Sir! is, dare I say, quite hilarious.  It's a black humour to be sure and not exactly what I was expecting from the author of The Hockey Sweater (this link takes you to a National Film Board video of Roch Carrier's short story about his childhood playing hockey in Quebec - go watch it right now if you never have!).

While this book may sound grim, it is saved by its sense of humour, and the harshness of the events during the wake and funeral of the repatriated war hero are softened by the layering of allegory.  It's not really two men pounding on each other... it's a symbol for the oppressed and colonised striking out at the oppressor.  Roch Carrier is able to use individuals to reflecting the universal themes of the novel without diminishing the human-ness of the characters.  The characters never descend into a state of two-dimensionaly symbolism.   Even though it was published 43 years ago it has stood the test of time.  This is not just a Quebecois, but a Canadian, classic.