How the Heather Looks by Joan Bodger 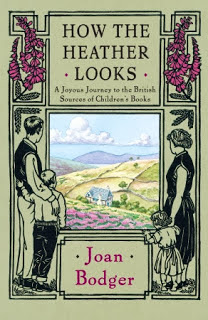 I remember finding an ancient copy of this book on the library shelf in the late 1990's.  Because my arms were already full with other books I left it behind, writing down the name and promising myself I would come back for it.  When I returned to sign it out, it was gone! - removed from the library catalogue never to be seen again.

I was recently reminded of How the Heather Looks and you can imagine my thrill when I discovered that the book had been re-issued in 1999 with a new Afterword and updated Notes by Joan Bodger.

In 1958, Joan Bodger and her husband John used some inherited money to take their two small children on a tour of England. The holiday becomes a quest:

Our children were so literal!  They besieged us with questions.  Would we see where Rat and Mole had had their picnic?  Could we climb to the Enchanted Place at the Top of the Forest?  Would we go down to towered Camelot?  Could we pay a call on Mrs. Tiggy-Winkle?  Privately we adults told each other that of course such places did not exist in reality, but the children's faith was unfaltering - and unnerving.  Perhaps, we said, a few of the places really did exist.  Perhaps, we said cautiously, we could seek them out.


And after some intense research...

The more I read the more convinced I became that the children were right.  Most places in children's literature are real.  We could find them if we searched.  All we needed was faith.


So, the Bodgers set off on an adventure, and in her wonderfully written narrative we go along for the ride.  Along with her account of the family's adventures, Joan Bodger interjects interesting and relevant research done before and after their trip which fill out the story, adding layers of information that seamlessly combine with the memoir aspect of the book.

One of the most charming aspects of this story is in the quaint and simple way the family actually does its travelling.  To begin, they have taken a steamer across the Atlantic from their home in America, they spend a couple of weeks living in a converted gypsy caravan by the seashore, and very nearly spend a week on a barge.  It's not difficult to see why Joan Bodger has been the recipient of many requests for parenting advice, for the tone she uses when writing about her children is entirely charming.  The writing was done, no doubt with no small amount of nostalgia, for by the time the book was published in 1965, her family of four had broken apart, suffering death and illness.

I would highly recommend this to anyone who loves classics of children's literature, to anyone who enjoys travel memoirs, and to anyone who has children or knows children.  If I were prone to rating books I would give this one a perfect score.  It was worth the wait.