The History of Emily Montague by Frances Brooke 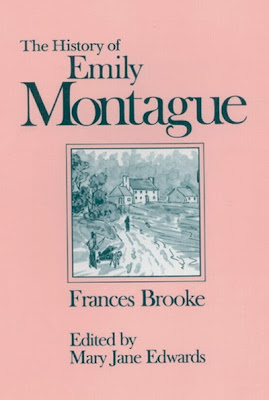 The History of Emily Montague is part travelogue, part political report, part love story.  A fascinating first-hand glimpse into the colony of Quebec just ten years following the 1759 Battle of the Plains of Abraham, the subsequent fall of New France, and Québec becoming a British colony.

John Brooke, the husband of author Frances Brooke, was a Church of England minister who joined the British army in 1757, was engaged in the Seven Years War as a chaplain in Halifax, Fort William Henry, and Louisbourg, before relocating to Québec in 1760.  There, he was appointed chaplain to the town of Québec, as parish priest to the civilians, and, in 1761, to the British garrison.  He was the only Protestant minister in Québec.  His wife, Frances Moore Brooke left London in 1763 with her sister and her son to join him. Three days after their arrival in Québec, on 7 October 1763, martial law came to an end with the creation of the British colony of Québec.

While she was in Québec, Frances Brooke wrote the manuscript for her novel, The History of Emily Montague.  An epistolary novel, it followed the format she had used in her previously published The History of Lady Julia Mandeville, and one that was in vogue at the time.  Written for an English audience, The History of Emily Montague is a compilation of letters exchanged between the eight main characters.  The vast majority of the letters relate to the ongoing relationships (friendly and romantic) amongst these relatives and friends.  The challenges, obstacles and drama (yes, lots of that!) associated with the eventual pairing of three sets of couples dominate the content of most of the letters.  Although at times a stilted device, the epistolary format does convey the distance of the colony from England, and the isolation, especially during the winter months when dramatic news would be months in arriving.

Edward Rivers, a British soldier has recently retired to Québec where his meagre salary will stretch further than it would in England.  He writes to his sister Lucy and satisfies her curiosity regarding life in the new colony.  Of the 228 letters, only five originate from Lucy, for she is the stand-in for the audience - the "relatable character" for the reading public in England.  Edward also continues a correspondence with an old friend, John Temple, a cad with a propensity to break young hearts.  Almost immediately, Edward Rivers meets and falls in love with Emily Montague, a young British woman living in Québec.  Emily, in turn reveals her true feelings through letters to her friend Arabella "Bell" Fermor, a charmingly well-developed character who is a flirtatious, fun-loving drama queen, with pragmatism and an amusing turn of phrase. [As an aside, Frances Brooke gave a nod to Alexander Pope's The Rape of the Lock with the naming of this character: his fictional Belinda was named for the real-life Arabella Fermor]. Arabella falls in love with Fitgerald, another retired soldier, and must reconcile her feelings for one man, and her love of coquetry to all, while her father, William Fermor, contributes the bulk of the political commentary in his letters to an unnamed English earl.

By setting this love story in the "exotic locale" of colonial British North America, Frances Brooke is able to have her characters express their love of nature and the grandeur of their environment to their English correspondents.  The repeated adjectives "noble," "awe-inspiring," and "sublime," capture the drama of the unspoiled landscape; for Québec is a kind of Edenic paradise to the characters:

I know not what the winter may be, but I am enchanted with the beauty of this country in summer; bold, picturesque, romantic, adorned by a thousand wild graces which mock the cultivated beauties of Europe.  The scenery about the town is infinitely lovely; the prospect extensive, and diversified by a variety of hills, woods, rivers, cascades, intermingled with smiling farms and cottages, and bounded by a distant mountains which seem to scale the very Heavens.
(Letter X from Arabella Fermor to Lucy Rivers)


Day trips to nearby sites of natural splendor were popular amongst the colonists, and from the accuracy of the descriptions, it is clear that Frances Brooke had first-hand experience with the local spots of interest.

One of my favourite paintings from Early Canada is this depiction of the ice cone at the Montmorency Falls by Robert Todd.  The mist from the water freezes and drops beside the falls in a pyramid, or ice cone.

I am just returned from one of the most agreable jaunts imagination can point, to the island of Orleans, by the falls of Montmorenci; the latter is almost nine miles distant, across the great bason of Quebec; but as we are obliged to reach it in winter by the waving line, our direct road being intercepted by the inequalities of the ice, it is now perhaps a third more...the serene blue sky above, the dazling brightness of the sun, and the colors from the refraction of its rays on the transparent part of these ridges of ice, the winding course these oblige you to make...

Your dull foggy climate affords nothing that can give you the least idea of our frost pieces in Canada; nor can you form any notion of our amusements, of the agreableness of a covered carriole, with a sprightly fellow, rendered more sprightly by the keen air and romatic scene about him; to say nothing of the fair lady at his side...

As you gradually approach the bay, you are struck with an awe, which increases every moment, as you come nearer, from the grandeur of a scene, which is one of the noblest works of nature: the beauty, the proportion, the solemnity, the wild magnificence of which, surpassing every possible effect of art, impress one strongly with the idea of its Divine Almighty Architect.

(from Letters LXXX and LXXXI from Arabella Fermor to Lucy Rivers)


But although the natural world excites Arabella to raptures, none of the letter-writers are quite so complimentary to the French Canadiens, nor to natives they encounter.  In fact, they are more likely to be described with the words "idle," and "indolent," "ignorant," "lazy," "dirty," and "stupid."  The vagueness of these descriptions give the impression that perhaps Frances Brooke may have had only limited exposure to those outside her own class, and also re-enforces the superiority of the British over the conquered races.

Frances Brooke uses The History of Emily Montague as a political tool to forward her belief in a colonial assimilation agenda, and to counter the leadership of Governor James Murray.  Murray served as governor from 1760-1768, although because of his conflict with the British merchants, and men like John Brooke, he was recalled from his post in 1766.  Murray believed that the smartest way to rule over the Canadian population was in a tone of tolerance.  He wished to allow them to maintain their own Roman Catholic religion with their own clergy and bishop, and even to allow Protestants to convert and remarry according to Roman Catholic rites when desired.  This did not suit John Brooke, or, presumably Frances Brooke, who believed the colony should have a national religion (Anglican), with little allowance for those of different beliefs. Brooke worked to facilitate the transfer of the colony from Roman Catholic to Anglican (including all property), and believed this conversion should occur as quickly as possible with the enforcement of English language and laws. The letters from William Fermor to an unnamed English earl summarise this conflict, and even Arabella contributes her thoughts about religion.


The History of Emily Montague was originally published in four volumes.  It appears that Frances Brooke may have only had enough material for three volumes for the last fourth of the novel is seriously lacking stylistic continuity with the preciding volumes.  It definitely feels as though it were tacked on to round out the set - a serious case of "Contractual Obligation" leading to a shoddy conclusion.  Although a very long and very predicably plotted book, it is a fast and enjoyable read.