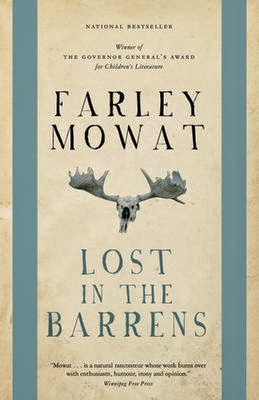 Originally published in 1956, Lost in the Barrens is one of the earliest of Farley Mowat's numerous publications.  It was the winner of the Governor General's Award for Juvenile Literature, the Book of the Year Medal from the Canadian Association of Children's Librarians, and the Boys' Club of America Junior Book Award.

One of Canada's most well-known writers, Farley Mowat has explored the themes of environmentalism, indigenous culture, the arctic, and early exploration in all his work.  All of these concerns are at the forefront of this well-written and engaging novel.

Jamie Mcnair, a white boy from "down south" (Toronto) is being raised by his uncle, a Scottish fur trapper, in the wilderness of northern Manitoba after the death of his parents.  Jamie becomes lost in the barrens with his friend Awasin Meewasin, the son of a Cree chief.  Forced to live by their wits and rely on their knowledge of the land, the boys survive through months of isolation on the arctic tundra.

Jamie may be a southern white boy, but he has lived in the north for a full year and learned the ways of the inhabitants; he has grown strong and independent under the tutelage of his uncle and the local natives. On the other hand, Awasin is a native boy who has spent the past three years at school in Pelican Narrows learning English. So, the boys almost meet in the middle, culturally speaking. This element of cultural exchange where the boys work in co-operation is the real point, and the real strength of the story.  This is a story of the sharing of the best of each culture for the common good, rather than the domination of one over the other.

Neither boy could have survived without the other, for they each contribute to the mission. Yet, in the end, they are both foreigners in the treeless tundra. The environment is unforgiving and as long as they work in harmony with nature they are safe. When they both become so eager to be home that they ignore all they have learned about the north, they put themselves in the greatest danger of all. Before their mistakes are fatal, they are saved by the native dwellers on the land (then called the Eskimo, now known as the Inuit), the people who are most in tune to living in the harsh northern world. This "rescue of the foreigner" theme is a familiar one in northern literature, 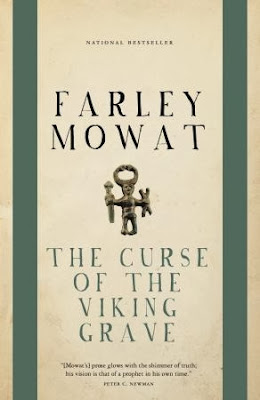 The Curse of the Viking Grave, sequel to Lost in the Barrens, was published eleven years later, in 1966, and picks up the story of Jamie, Awasin, and their new Inuit friend, Peetyuk. On their first adventure in Lost in the Barrens, Jamie and Awasin had ventured to the Stone House, the reputed home of a Norseman who had integrated into the society of the Barren Lands, married an Inuit wife, and remained behind when his Norse crew abandonned them in their attempt to find their way home.  In the Stone House of the Norseman, Jamie and Awasin had found Viking artefacts buried with the long-dead Norseman.  When the northern natives face health challenges in the form of a devastating influenza outbreak and starvation, the boys decide to retrieve the artefacts and sell them to raise money to provide much needed assistance for their suffering northern community.

Farley Mowat explores the expected themes of isolation, governmental neglect, and environmentalism that we have come to expect from his writing, but he also looks more closely at inter-tribal rivalries in the north, and the role of women in Inuit, Cree and white society. Having apparently worked out the centuries-old hostilities between the Inuit and the woodland Indians in the first book (!), there is a new hostility introduced between the Chipeweyans and the Cree with the shifty character of Zabadees.  This threat fades without developing when Zabadees abandons them without effect.  The introduction and inclusion of Angeline, the sister of Awasin allows Farley Mowat to explore the role of women in both Cree and Inuit society.  Jamie, the representative for white society is a bit of a Neanderthal who constantly underestimates and misjudges Angeline's value to their mission.


Farley Mowat has been a controversial writer with his tendency to blur the lines between fiction and non-fiction, and for his unsubstantiated historical theories. One of these is his belief that the early Norse explorers travelled much further inland than has been accepted by the scientific community. Lost in the Barrens, although an independent story, also acts as the set-up to the sequel The Curse of the Viking Grave, in which Jamie and Awasin return to explore a site first visited in Lost in the Barrens. The Curse of the Viking Grave expands his exploration of Farley Mowat's theory of early Norse exploration in Northern Manitoba.

These are really interesting, well-written adventure stories full of action and suspense.  Full of detailed explanations of living in the harsh north these are in some ways a Canadian equivalent to Laura Ingalls Wilder's Little House books, but rather than watching Ma make butter and Pa kill a pig, we watch these able teenagers kill and skin a caribou, properly cache meat on a frozen river, build a shelter capable of withstanding a northern winter, and navigate bolder-strewn rapids in a canoe.  If you didn't read them when you were a kid, read them now.