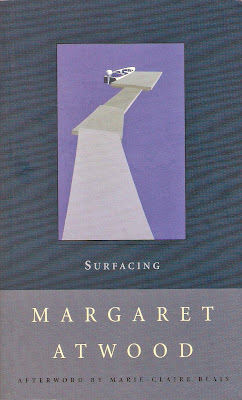 Surfacing by Margaret Atwood is a deeply satisfying book.  This is the kind of book that I can (and did!) turn from the last page back to the first and start over again immediately.  It captivated me in a way I love to be drawn in to a story.  I knew that I had to dig deeper, think more, and revisit it until all the divergent threads formed a clear (er) picture.  Margaret Atwood tackles some big themes in this novel: life and death, guilt, personal and national identity, feminism, the limits of language, power hierarchies...  This is a novel, like all of Margaret Atwood's, that rewards repeated investigation.

The theme I found most interesting in this novel is the struggle to create wholeness from separation and division, and the access to true identity by casting off the superficial.  This theme is explored through the main character's psyche and her interpersonal relationships, and is reflected as well through the exploration of the forging of a Canadian national identity.

A young unnamed woman, daughter of unnamed parents, sister of an unnamed brother, and the main character of Margaret Atwood's Surfacing, travels with three friends to her father's island home in the northern bush of Québec after she learns that he has disappeared.  Although on the surface it is an ordinary weekend-at-the-cottage excursion for the visitors, there is an undercurrent of tension for the main character as she becomes increasingly emotionally separated from her friends: the jovial but deeply misogynistic David, his emotionally fragile and submissive wife Anna, and her own boyfriend Joe, a silent, brooding, unreadable force.  Her friends never see the depth of her feelings as she slowly and silently comes to terms with her past.  The story is told in the first person, and almost exclusively seen through the eyes of the main character.  We are privy to her experiences, her memories and her thoughts.  There is no omniscient narrative voice.

The true self is deeper than surface appearance: clothes, cosmetics, the physical body, language, gender, and even nationality are just insignificant coverings of the true self - the deepest part of our subconscious.  All the divisions in the world are irrelevant to this inner truth.  The main character must merge all these superficial divisions that have been imposed on her, and must also confront the lies she has told herself which have split her in two before she can achieve healing and wholeness.

When we accept these divisions rather than challenge them, the divisions do not go away but become engrained into our identity, further separating us from our humanity.  We tell ourselves lies that become truths.  By nature, our very humanness means that we embody a destructive force within.   We cannot escape this conflict.  We must resolve it, and we cannot resolve it if we do not know what we stand for.  Before we can challenge the oppression from without, we must resolve the oppression from within in order to be whole.

The novel is rife with divisions.  The main character has experienced an internal separation in her psyche that is manifest in the doubling of the life lines on her palm.  She spent her childhood moving back and forth between the northern bush and the urban south, where even language and clothing create divisions.  She has broken off communication with her parents.  Divisions are also central to the national identity in Surfacing.

Surfacing was published in 1972, the same year Margaret Atwood's seminal work of Canlit: Survival: A Thematic Guide to Canadian Literature was released.  These two books share more than just a publication date, for they are both concerned with defining Canada's true national identity.  This identity does not rest solely on the post-colonial separation from its "parents" England and France, nor does it rest on its differences with America.  For, one's identity cannot rightly said to be whole when it is only defined by what it is not.  For a true identity of nationhood, we must look much further below the surface. When we look below the surface we see the experiences that we share, that bring us together, that have nothing to do with superficial divisions of language and appearance.


This is a novel that has rewarded me with insights about myself and about the big themes in life: power, the subconscious, self-healing, the importance of history, feminism, innocence and guilt, independence, and the nature of good and evil, and the redemptive force of nature.  There are so many avenues to explore and question, so many connections to make.  Whenever I read Margaret Atwood's work I always marvel at her ability to weave a tale.