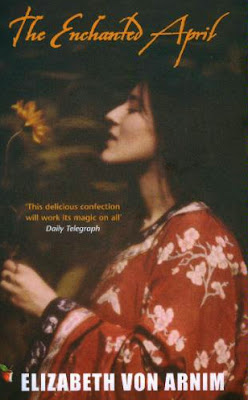 As I began Elizabeth von Arnim's The Enchanted April I was immediately reminded of Elizabeth Taylor's Mrs. Palfrey at the Claremont because of the setting ("a woman's club in London on a February afternoon, - an uncomfortable club, and a miserable afternoon"), and by the characters who were yearning for something better in their lives - something more exciting.  Mrs. Wilkins "was the kind of person who is not noticed at parties.  Her clothes, infested by thrift, made her practically invisible; her face was non-arresting; her conversation was reluctant; she was shy."  One afternoon, however, she was compelled by an inexplicaable impulse to engage in conversation with Mrs. Arbuthnot, and, because she faced her fear and took action wonderful things began to happen.  Mrs. Wilkins and Mrs. Arbuthnot decide to rent a small villa in the south, and after finding two other women to share the cost with them, they leave their grey London lives for the wistaria and sunshine of Italy.

Lotty Wilkins from the very beginning is the catalyst for change.  Sometimes taking leaps is worth the risk, and as she tells Ruth Arbuthnot: "sometimes I believe - I really do believe - if one considers hard enough one gets things."  She challenges the other women to have faith in the transformational powers they all have within, even while accepting that change can sometimes mean discomfort.  She takes on the role of seer, prophesying: "Mrs. Wilkins announced that at San Salvatore Mrs. Fisher would find her level. 'I see her finding her level there,' she said, her eyes very bright": she holds a vision in her mind until it happens - and it always does happen!  Lotty Wilkins connects with her inner divinity:


If she went on like this, soon a nimbus might be expected round her head, was there already, if one didn't know it was the sun through the tree-trunks catching her sandy hair.

This inner divinity originates in love, a commodity in short supply in their regular lives, but the most important ingredient in the power of transformation.

The women find an earthly Paradise in Italy.  They travelled through a kind of Purgatory during their voyage to escape the hellishness of London in March.


"I suppose you realise, don't you that we've got to heaven?" she said, beaming at Mrs. Fisher with all the familiarity of a fellow-angel.

They immediately experience physical transformation, looking younger, and Mrs. Wilkins, losing her shyness and agitation, becomes personable and calm.  They are transformed by the sunshine, the flowers, and by their own happiness.   Mrs. Wilkins, appreciating the differences between the four of them notes that they are all together just as "the dandelions and the irises, the vulgar and the superior, me and Mrs. Fisher - All Welcome, all mixed up anyhow, and all so visibly happy and enjoying ourselves."  They are not required to do anything except enjoy themselves.  "Nobody helps anybody in heaven... You don't try to be, or do.  You simply are."

The ladies are able to release their attachment to the past and live in the present: "they were just cups of acceptance" which is more difficult for the oldest amongst them: Mrs. Fisher lives her whole life in the past until she allows the power of the present to break down her defences.  The search for happiness is something within each of the characters, and each one must overcome their feelings of guilt and their fearful resistance to change.

I enjoyed re-reading this novel, the plot which I had largely forgotten, notwithstanding the lack of subtly in language and plot devises (quite different than her cousin Katherine Mansfield!).  I did enjoy the frequent changes in point of view from the omniscient narrator to the interior monologue which greatly enhanced the development of the characters.  I enjoyed the reminders of E. M. Forster's A Room with a View and Where Angels Fear to Tread.  But mostly, and above all, I felt that it was the perfect book for lightening my mood, to reminding me that transformation is possible even when things seem grey and "hellish," and that love is always the answer.  We do have the power within to change the way we think, to change the way we feel, and to create a better life.

Many thanks to Lucy at Therapy Through Tolstoy for the recommendation!