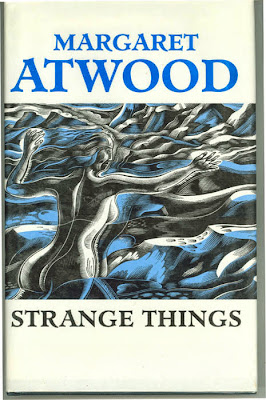 Strange Things was first presented as a series of four lectures at Oxford University in 1991 as part of the Clarendon Lecture Series in English Literature.  With her characteristic sense of humour, Margaret Atwood explores the The Malevolent North in Canadian Literature through three different themes: the mysterious, magnetic lure of the sinister North, the north as a place of renewal and the urge of non-Native peoples to connect with the aboriginal people and the land,  and the North as the home of the Wendigo, the snow monster. In her fourth lecture, these themes are re-examined through the women writers who have adapted them for their own purposes.


Concerning Franklin and his Gallant Crew

The first lecture tells the story of Sir John Franklin and his crew of 135 who left England on a polar expedition in 1845 in search of a pre-Panama Canal commercial trade route through the Arctic.  The mysterious disappearance of their ships the Terror, and the Erebus has long inspired artists and writers.  Margaret Atwood looks at work by E. J. Pratt, Gwendolyn MacEwen, Mordecai Richler and Robert W. Service, and how the lure of the north calls out to the "ancient hubris in the dreams of men".

After the death of naturalist, writer, lecturer Grey Owl, it was discovered that he was not in fact an Ojibwa, but an Englishman from Hastings named Archie Belaney. 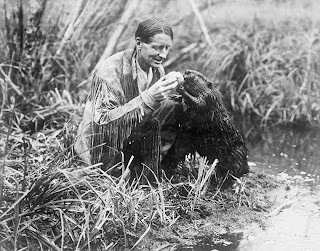 Margaret Atwood, refers to other white men who are aboriginal wannabes, and explores the ideas of "claiming kinship" with Native Canadians, the Woodcraft movement, the origins of the Boy Scouts, the "appropriation debate," and the complexity of defining, in Canada, who qualifies as native.

I enjoyed this lecture which gave me a new perspective on the summer camp tradition of encouraging children to become metaphorically Indian, which I certainly experienced both at school and camp, and can still sing all the words to "Land of the Silver Birch" (check out this Grade Five students' video).  This lecture also made me keen to read Grey Owl's writings, John Richardson's Wacousta, Robert Kroetsch's Gone Indian, and to find a biography of Ernest Thompson Seton.


Eyes of Blood, Heart of Ice: The Wendigo

The Wendigo, the legendary northern cannibalistic monster of the eastern boreal forest evokes fear, for along with the possibility of being eaten by one, it is possible also to become one.  It evokes fear in me because I'm not all that comfortable with the vampire/zombie kind of monsters who lack language and induce madness.  It's not really my thing, so I found this lecture the least interesting for me.  (Yes, I'm cowardly like that.)  It did make me slightly curious about Wayland Drew's novel The Wabeno Feast, but the creep-out factor is probably too high for me.

Although CanLit is filled with wonderful women writers and has been since the earliest days of exploration and settlement (the records of the nuns of New France, the wives of British officers and settlers like Anna Jameson, Susanna Moodie and Catherine Parr Traill...) the female voice has been excluded from the writing of the north.  Margaret Atwood's fourth lecture is about what happens when women writers incorporate these traditional literary motifs created by men into their own writing.  She also briefly touches on how she has used these themes in her own writing in Surfacing (1972, novel), The Journals of Susanna Moodie (1970, poetry collection), and Wilderness Tips (1991, short fiction).

This is a captivating little book, and of special interest to anyone with a fascination with Canadian Literature.  She expands a few of the themes from her landmark 1972 Survival: A Thematic Guide to Canadian Literature.  Margaret Atwood's unique sense of humour and wry wit is in evidence, and I found this work very readable and entertaining.  How wonderful it would have been to have been in attendance for the lectures!  I have now added quite a number of books to my To Read list.