Word to Caesar by Geoffrey Trease 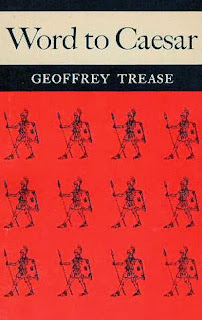 In the remote Roman garrisons in northern Britain, young Paul witnesses devastating barbarian attack which destroys the fort he has called home, and leaves him an orphan.  He escapes with his life thanks to Severus, a Roman poet who offers Paul his protection.  Paul discovers that his debt to Severus can be repaid, but it requires that he travel to Rome, a homeland he has never visited, and deamands bravery, quick wit and a lot of luck.

In typical Geoffrey Trease style, this adventure is action-packed, and involves all manner of jumping into rivers from prison windows, escaping face-to-face encounters with angry lions, outrunning bloodhounds through the forest in bare feet (!), and using a diamond ring to cut a hole in a glass window pane not once, but twice!

Although Trease wrote his stories for both girls and boys (usually including a protagonist of each gender to share the stage) Word to Caesar is disappointingly light on female characters.  There are three in total: one is a nasty spy, one an annoying brat, and the third shows up near the end and disappears just when things get really dangerous.  This aspect of the story was much less satisfying for my daughter to whom I was reading it aloud.

The historical aspects of the Roman setting were much less convincing than when he writes about Britain in the same period.  However, he does take great care in describing the details of the Circus Maximus, and that made up for any lack in the fact that Rome was otherwise fairly nondescript.  We both agreed that Geoffrey Trease writes a good adventure story, although this was perhaps not his finest effort.  However, it is exactly the kind of historical fiction Elizabeth and I both enjoy.