I had a vague recollection of having written something about Cheryl Strayed's Wild at the beginning of December, but a lot of things from the first week of December are fairly foggy for me.  When I opened the draft I was surprised to see that it was as complete as it is.  So, I am posting it as it is: 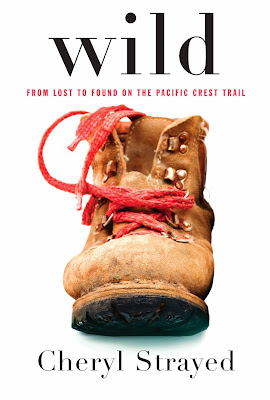 The travelogue is a particularly favourite genre of mine.  A travelogue written by a woman hiking an extended wilderness trail alone is sure to catch my interest.  I was surprised when I saw the 2012 publication date on Cheryl Strayed's Wild: From Lost to Found on the Pacific Crest Trail because it seems as though I've been hearing about it for years.  I heard her interviewed when the book was first released and I thought, "That sounds right up my alley!"  But then I stumbled on a few online reviews, the jist of many expressing the opinion that the author was whiney and self-pitying, perhaps a bit self-indulgent, and with boundary issues about how much private information is Too Much Information.  And then Oprah gave it her stamp of approval.  Well, I read it anyway, and have to say that I really, thoroughly enjoyed this book.

Wild is a memoir of the summer of 1995 when the author treked long portions of the Pacific Crest Trail in California and Oregon.  Cheryl Strayed hiked 1100 miles on her own in an attempt to come to terms with the loss and pain in her life.  With connections to The Pilgrim's Progress continually coming to the surface, Strayed records her journey carrying her enormous rucksack she named "Monster."  As she progresses, the weight of her burden is lighter as she becomes stronger.  This book is heavily weighted with this kind of symbolism.

The entire journey is examined with almost twenty year hindsight, but never feels nostalgiac or sentimental.  Strayed is a bluntly honest writer, telling all even when it is unflattering and embarassing.  There were definitely some squirm-inducing moments, but I respected her need to tell the whole story.  She explores her family history, the death of her mother, the abusive birth father, the traumatic death of a horse.   I will admit to reading some of these scenes through squinted eyes, skimming first to prepare me for what was to come. But it never got so bad I had to skip or stop reading.  She writes with the same frankness about sexual encounters, menstruation and heroin use, and with an unvarnished honesty that I admired even whilst feeling a tad uncomfortable with the bluntness of it.

I suspect it has probably taken Cheryl Strayed all these years to appreciate how important that summer was in her life.  Many of the revelations must have happened long after the trek was complete, for as she says, the expectation that she had before her trip (that she would be filled with catharitic experience sitting by a mountain lake at sunset) was pushed aside by the reality of just surviving the ordeal of traversing the land every day with too-small boots and a too-heavy rucksack.

When I was twenty-two I left Canada for a six-month trek around Europe alone.  While my journey was considerably less physically arduous, and I definitely had more opportunities for bathing, I could identify with many of her experiences as a woman traveling alone.  It brought back many wonderful memories of the deep bonds that can form between travellers, and the transformational quality of long-term travel.


Some of my favourite travel memoirs: