Shadows on the Rock by Willa Cather

I found another unfinished review from last month.  I am feeling well enough to read now that I no longer have to take pain killers that muddle my brain, but have not been able to sit at the computer for longer than a few minutes so things have been relatively quiet here.  I have given myself the grace of the month of January in which to rebuild my strength and health, and am very grateful that I am able to get out for walks around the neighbourhood between blizzards and record snowfall, icy sidewalks permitting.

I read Willa Cather's Shadows on the Rock at the end of November and enjoyed it so much that it made my list of favourites for the year.  I had a lot more to say about this fantastic book, but since I know that I will be returning to it again, I have decided to go ahead and post these rather abrupt thoughts. 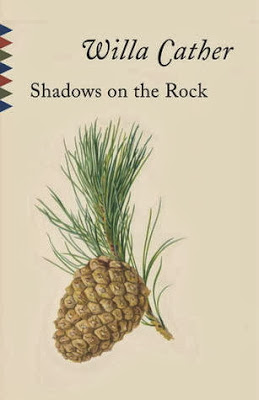 I have come to the writing of Willa Cather quite late.  Her writing was never assigned to me in school, even in the American Literature class I took in university, and until I found a copy of My Ántonia in a charity shop I knew very little about her writing.  I enjoyed My Ántonia - the first book of 2013 for me.  When I was looking through the appendices of Janet Friskney's New Canadian Library I was surprised to see Shadows on the Rock in the list of titles considered but never included in the series.  Why would a writer so American as Willa Cather be considered for this series of books that are historically significant to Canada?  I took myself to the library and found a beautiful Vintage Classic copy (the cover above) and devoured the work during one chilly Saturday.

This is a work of historical fiction set during one year (which begins in October, 1697) in colonial New France.  It is the story of twelve year-old Cecile Auclair, who, along with her apothecary father Euclide Auclair is just as transparent and open as their name suggests. This is a quiet novel in which the focus is on the small events, the everyday occurrences of relatively unimportant people living in exile from the rest of the world in the isolated colony.  The story is episodic rather than plot-driven, and begins with the return of the last ships to France in preparation for the long winter of seclusion that is to come.

For me, the most interesting aspect of the novel is the theme of the immigrant never quite belonging to the culture from which they come, or to the one in which they live.  Although I have always lived in Canada, and never been an international "immigrant," I have lived in twenty-two houses in five provinces in my lifetime, and strongly identify with the immigrant's quest for "home."  My daughters have lived in the same home in Alberta their whole lives, while my husband and I consider Kingston, Ontario - 4000 km away - to be our emotional centre. This leads to frequent discussions about home in our house!  When I was a girl, I felt much like Cecile for whom Quebec is home even though for her father, France is home and Quebec is a temporary place to stay.

She put the sled-rope under her arms, gave her weight to it, and began to climb. A feeling came over her that there would never be anything better in the world for her than this; to be pulling Jacques on her sled, with the tender, burning sky before her, and on each side, in the dusk, the kindly lights from neighbours’ houses. If the Count should go back with the ships next summer, and her father with him, how could she bear it, she wondered. On a foreign shore, in a foreign city (yes, for her a foreign shore), would not her heart break for just this? For this rock and this winter, this feeling of being in one’s own place, for the soft content of pulling Jacques up Holy Family Hill into paler and paler levels of blue air, like a diver coming up from the deep sea.


This is the story of how the French colonists became Canadian.  Cecile becomes like Maria Chapdelaine, the Mother of the Canadians.  Generally speaking, psychological development of the characters is minimal, although the depth of Cecile's fears of upheaval in the impending return to France are vividly realised.  I think this book would deeply resonate with immigrants of all kinds (international, or interprovincial!).  It is about making "a place to stay" into a home, and the use of story to do that.  Stories that are told become the history of the community, and the way of knowing about one's past, one's surroundings and one's place.  We are grounded and rooted through the emotional links we create to the land, to our neighbours, to our institutions.  Willa Cather has given us a sense of the creation of home in Quebec through the stories she includes.

Now that I have read it, it is less surprising to me that this novel was considered for the New Canadian Library series than that it was rejected (this decision may have been a matter of copyright logistics rather than content) for Cather did not just set her novel in what became French Canada, but just as significantly, adopted many of the prevailing themes of the literature of Canada.  We see Northrop Frye's "garrison mentality" at play (Quebec is a refuge in the wilderness), and we see the theme of "home" and stasis explored (as opposed to the expansionist and movement-prone themes in American literature).  I am looking forward to reading Death Comes for the Archbishop to see if she is able to achieve the same thematic sympathy with the New Mexico Territory that she does with seventeenth-century New France.

Although this novel must have taken an astounding amount of research, Willa Cather never turns it into a history lesson.  The intimacy of the setting and the characters gives this novel a human scale which is its true charm.

Here are some images of some of the real characters found in Shadows on the Rock:

You can read the entire text of Shadows on the Rock at the Gutenberg site online.
I highly recommend it!