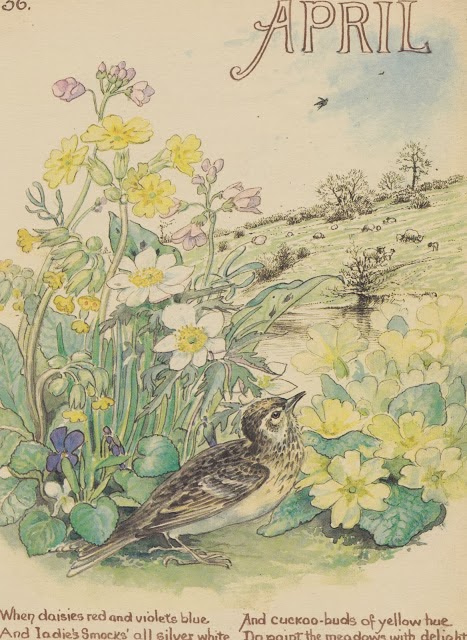 Inspired by Edith Holden's "The Country Diary of an Edwardian Lady" I have been trying to capture moments of outdoor beauty.  I was able to find some little bits of green in sunny southern nooks and crannies at the end of this month.  Spring is one of the longest seasons here and starts when we are still winter's thrall, knee deep in the white stuff and in the seventh or eighth month of boots and coats.  We tell ourselves "Spring is Coming!" for at least two months of yo-yo-ing temperatures and the occasional blizzard until the rains of June arrive.  Last week we were blessed with three days of temperatures in the 20s and it was bliss!  This morning my car dinged a Possible Icy Roads warning that alerts me when temperatures dip to 3 degrees, but never mind: "Spring is Coming!"

And so are the lilacs :) 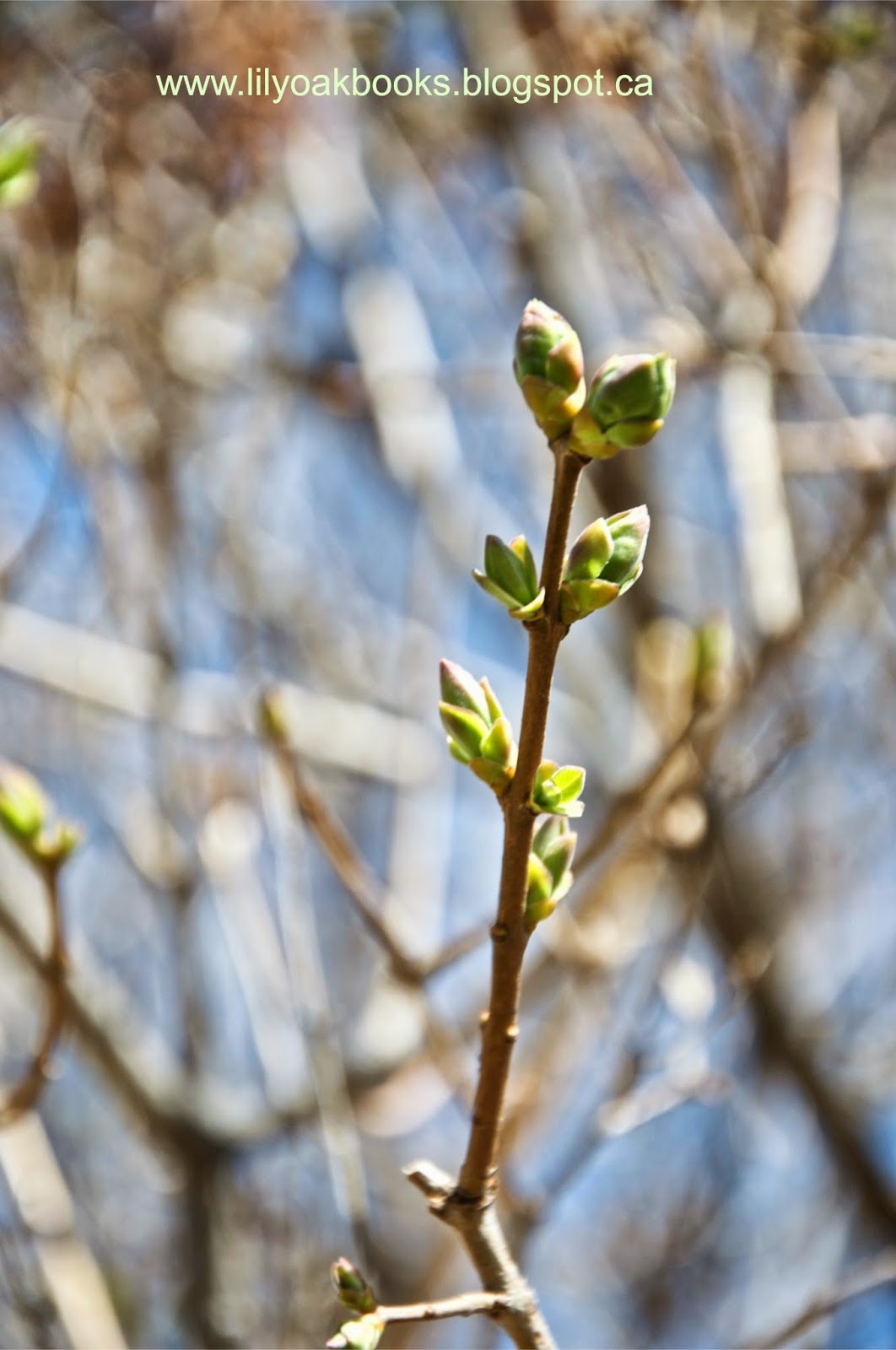 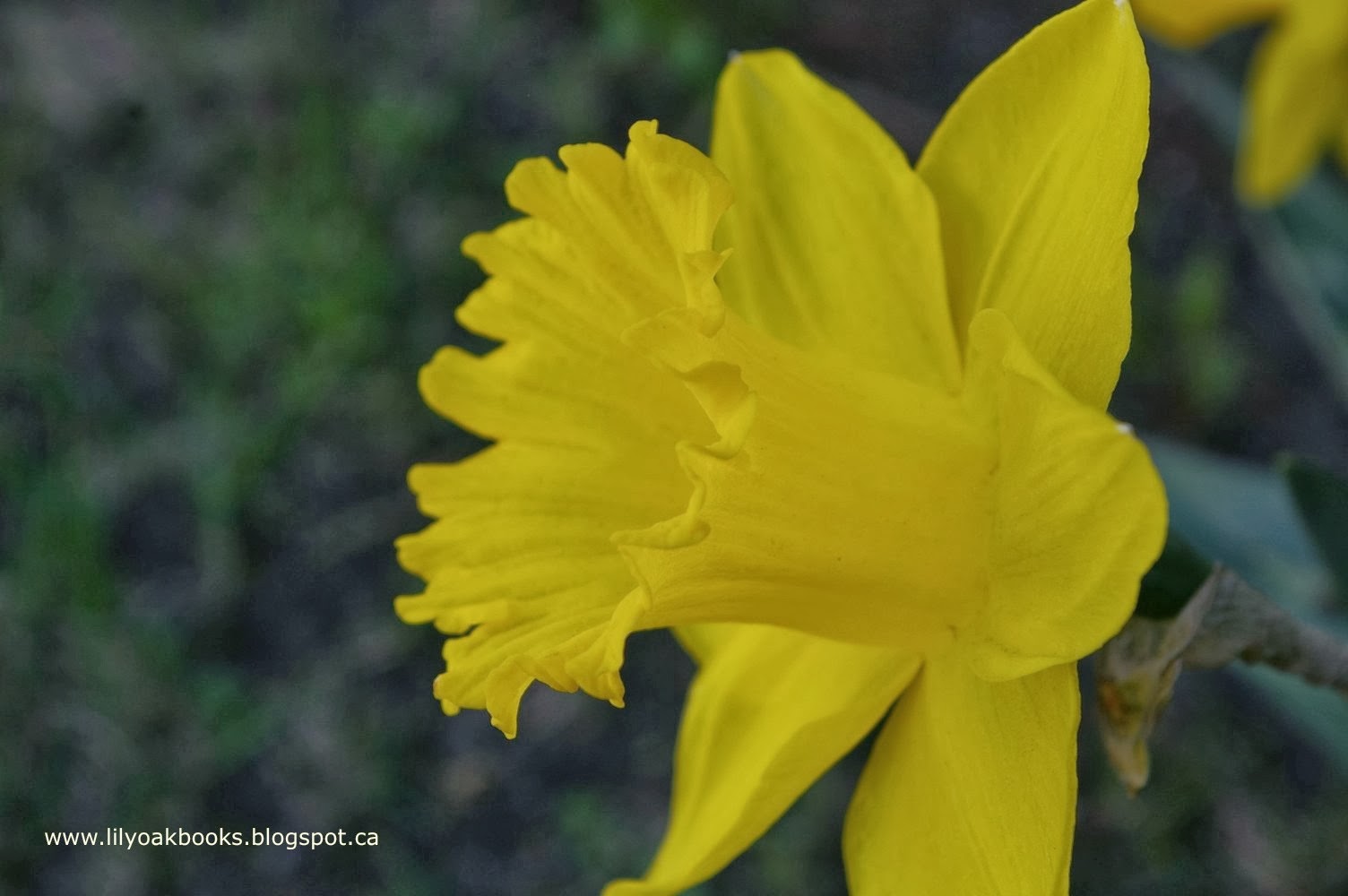 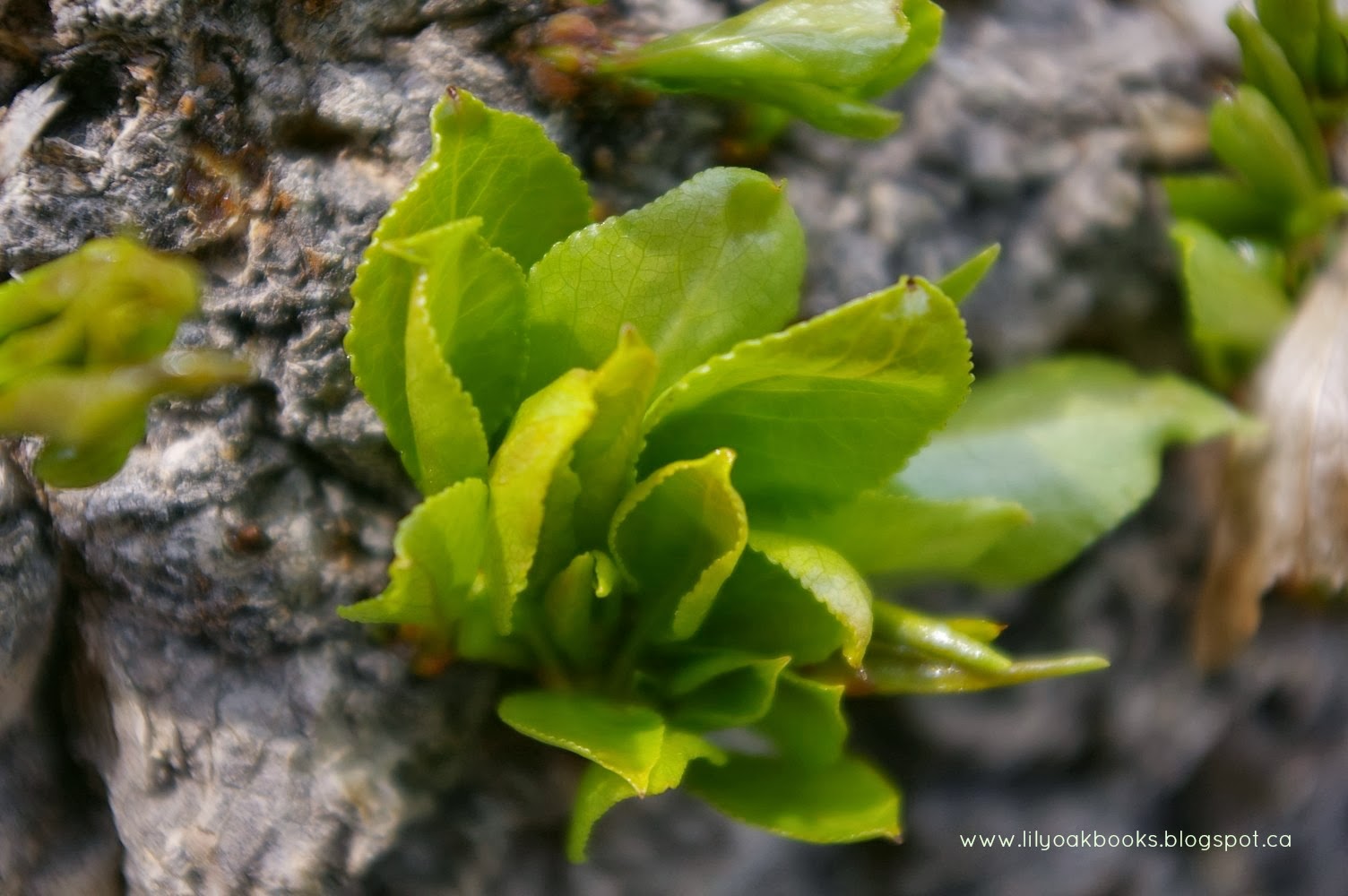 April was a mixed bag of reading for me.  I absolutely adored Once, Only the Swallows Were Free by Gabrielle Gouch.  So beautifully written, the author recounts her early years in communist Romania, and her family's eventual emigration to Israel.  She intersperses the account of her return to visit her half-brother who remained in Romania with the memories of her childhood and adolescence, as well as the history of her parents.  She did an excellent job of depicting the oppression of the communist state, of knowing everything you said and did could come back to haunt you.  I have been quite ruthlessly purging all books I have read and know I will not re-read.  I am keeping Once, Only the Swallows Were Free, if not to re-read, to eventually pass on to just the right friend.

We are making our summer plans, and Elizabeth and I have decided that along with our dog Orca...

we will drive the 4000 kms at the beginning of June to our cottage in Ontario.  Erin and Howie will fly to meet us at the end of the month.  We are trying to come to a consensus about audiobooks this week.  We've done this drive every summer since 2009 and I'm thrilled to do it again this year.  I actually like highway driving, and a road trip is better as a getaway than a visit to a Caribbean resort in my book.  We'll take the better part of a week to do the "northern route" around the top of the Great Lakes.  As soon as we decided how the Getting There was going to work out I got excited about the drive.  Although I'm not sure I'd want to live in remote northern Ontario (and I certainly wouldn't want to pay the gas prices!) there is something so invigorating about the area.  Trees and lakes and rocks.  Rocks and lakes and trees.  People joke about how boring it is, but they joke about the prairies too and really, is there anything more beautiful than an endless field of wheat rippling in the breeze?


So, in anticipation of that experience I read Mary Lawson's Crow Lake and The Other Side of the Bridge, both set in the fictional town of Struan, which I imagine to be somewhere near Kirkland Lake, Ontario.  While the remoteness and the natural surroundings provide a backdrop, the real focus of Mary Lawson's writing is on characterisation.  There is no confusing one character for another, their profiles are so well drawn they do emerge fully formed.  They are books about the small moments in the lives of ordinary people living their lives in ordinary ways.

My Little Free Library find this month was J.K. Rowling's The Casual Vacancy which I think everyone read two years ago, so as usual I am a day late and a dollar short.  Like many others I found the bleakness and the cruelty of the characters rather challenging.  I searched for just one person to be nice to someone else, but almost in vain.  Her depiction of addiction (cause and effect) was powerful and graphic and yet very sympathetically portrayed.  Terri has to be one of the most heart-breaking characters I've ever read.  I wanted so much to see more resilience in some of the characters, but the way she was able to find nobility in the most unlikely places and to develop the characters through both their individual and collective pasts was fun to read and brought back many memories of the small towns in which I've lived.

I have failed miserably on my decision to forego buying any new books this year, but every purchase has made me very happy so I've forgiven myself and will probably continue to ignore that half-hearted decision.  Last week I had an astounding experience at a charity shop where I found that someone had donated 28 Virago Modern Classics (green covers) all in pristine condition and priced at less than $2 apiece. I only have my own experience to go on but I thought that was quite a find!  I shall look forward to working my way through some very new-to-me authors in the coming months.

On tap for May I have decided to focus on books that feature travel because the anticipation of the journey is half the fun, isn't it?  At the moment, I am thoroughly enjoying Andrea Barrett's The Voyage of the Narwhal, a fictionalised account of Arctic exploration and the search of the missing Franklin expedition.  Also on my little pile are Where'd You Go, Bernadette by Maria Semple, for which I've yet to see an unfavourable review, and am possibly the last person for whom it is still unread; Ethel Wilson's The Innocent Traveller, about which I know nothing except the name of the protagonist, but is a must-read after reading Hetty Dorval and The Swamp Angel; and Suzanne Desrochers' Bride of New France, a debut novel set in the 17th century about les filles du roi who travelled from France to Quebec to populate the New World; and the second in the childrens' series Mennyms in the Wilderness by Sylvia Waugh, about the suburban family who are forced to move to the country without revealing the secret they have successfully hidden for over forty years (they are life-size ragdolls).